One of the reasons that I went back to Paris was to learn about the life of some of my favorite artists. I wanted to know about the social fabric of the times, where they lived and worked, who their friends were, and also to try and get a sense of what it was like to be an artist back then.

Montmartre is a hill in the north of Paris that is known mainly for its artistic history towards the end of the 19th century. Many artists such as Picasso, Renoir, Vincent van Gogh and Toulouse-Lautrec  lived and worked there taking advantage of the low rent in the area.  While visiting the Musee de Montmartre I discovered an artist I knew very little about. Her name was Suzanne Valadon and she lived and worked on the property that is now part of the museum.

Walking into her studio is like going back in time.  The sketch I did at the top of this post  shows the working part of her studio. She was born in 1865 and grew up in poverty. When she was 16 she worked in the circus as an acrobat until she got hurt.  She then went on to be a model for Renoir, Toulouse-Lautrec and others.  During this time she learned how to paint by observing and learning their techniques while modeling. In the early 1890’s she befriended Edgar Degas who was impressed with her bold line drawings and bought a couple of her paintings.  She went on to paint for 40 years and became the first woman painter admitted to the Societe National des Beaux-Arts. 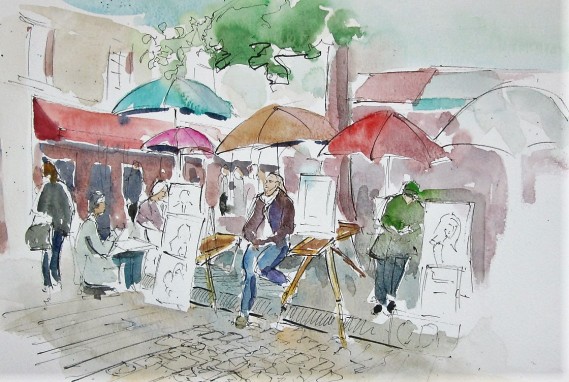 The Artist Market is in Montmartre at Place du Tertre.

The Moulin Rouge in Montmartre. I did this sketch from inside the Starbuck’s Coffee Shop. Oh well, they had the best view!

Au Lapin Agile: A tavern in Montmartre where Piccasso and Renoir would go. Pen and watercolor wash

Another view of Suzanne Valadon’s studio with a sitting area. There is a small drawing of her on the wall in the background.

The lower garden at the Musee de Montmartre. Renoir lived on this property in 1876.

Walking up the narrow streets towards the Basillica of the Sacre Coeur.

It all sounds great!  She has a beautiful studio in the artistic area of Paris and she has amazing artist friends that eclipse any education you would receive by going to art school. On the other hand her life was not easy, she was only 18 when she gave birth to her son Maurice. My understanding is that she was a single mother and her income at this time was from modeling.  Modeling was not so straight forward in those days.  Montmartre was a free loving kind of place during the “Belle Epoque” (1872-1914) and some artists expected or hoped for more from their models.  Being an artist back then was tough enough without being a female or being born into poverty.

As I sat in the lower garden behind the museum doing a sketch I imagined that many of the great artists such as Renoir had painted and sketched here.

2 thoughts on “Journey Around the World – Montmartre, Paris, France”