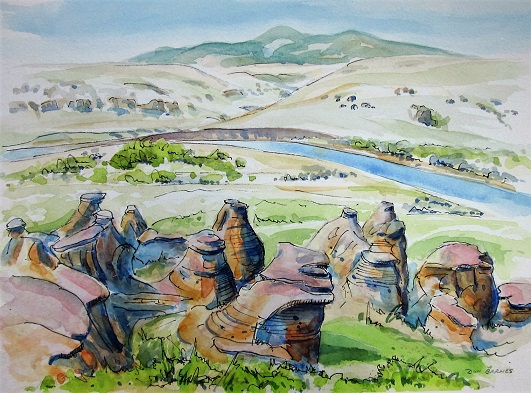 Leaving Banff, Alberta; we drove to Calgary and then south to Milk River, which is very close to the US. border and Montana.  This would be our last stop in Canada before heading south to Yellow Stone National Park.

Writing-on-Stone Provincial Park is a small nature preserve (18 sq. km.) that straddles the Milk River.  It contains the greatest concentration of rock art on the North American Great Plains.  We spent the night camped here near the river.  The next morning I was up early to paint and managed to do a couple of good sketches.  The Mule Deer that live in the camp ground make easy subjects as they allow you to get reasonably close.

I was also fascinated by the sand stone formations called “Hoodoo’s” that make an interesting subject to paint and sketch.  Some of these formations look like other worldly creatures.  The Blackfoot Peoples considered this place very sacred and were probably the ones who created many of the rock carvings and paintings.