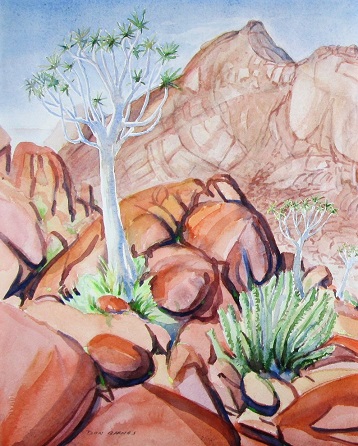 After leaving Etosha National Park our first stop was a farm that takes care of wild cheetahs.  In some parts of Namibia the cheetah is considered a pest that attacks and kills live stock. This beautiful cat that can reach speeds of 110 kilometers per hour has lost its territory to cattle farmers in Namibia and was being hunted to extinction.  In the 1980’s one farmer decided that there must be a better way than just killing them and so farmers started to bring him captured, wounded and baby cheetahs which he keeps in a fenced in area on his property.  It is not the perfect solution however it has become a small eco tourism business he calls Cheetah Park. The cheetah’s are kept in a large fenced in natural area and are fed daily.  He also has a few pet cheetah’s that live with his family in another fenced in area around his house. We camped on his property for the night and watched the farmer throw big chunks of meat to the cats from the back of a tractor.  The next morning before leaving Lyn and I got the chance to spend time with the tame cheetahs at his house and this was my opportunity to get some sketch’s done of these amazing cats.

Our next stop was Brandberg Daures National Heritage Site at Brandberg Mountain. We took a small hike part way up the side of the mountain to see rock paintings that date back 2000 years.  I had the chance to sit and sketch some of these paintings.  It was an amazing feeling to sit quietly in the presence of this ancient rock art and in my own way commune with artists from long ago. In the early days of tourism to this site people would throw water at the rock art to help enhance the colours for their photographs.  This caused a lot of damage to the paintings and some of them have faded quite badly.

After this experience we went on to a place called the Spitzkoppe Hills also known as the “Matterhorn of Namibia.”  It is a group of 120 million year old granite peaks in the Namib Dessert.  We had the time to go for a hike up one of these peaks.  There was no trail and so it was more of a scramble up the side through cactus, huge boulders and the odd Quiver tree which has the look of a tree from a prehistoric time.  The watercolour painting I have done at the top of this post shows the incredible colour of the rock in certain lighting conditions which in my minds eye could be what parts of Mars look like. 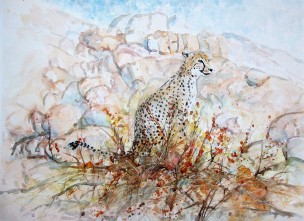 This painting was done from photographs of cheetahs at Cheetah Park. I changed the background to reflect its true habitat in Namibia. 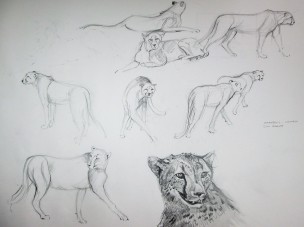 These drawings are from my sketch book. 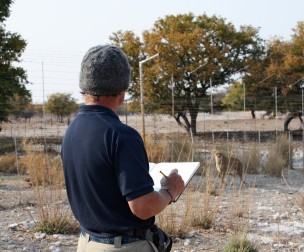 The cheetahs I was sketching were tame and so I was able to get very close. The experience was surreal. 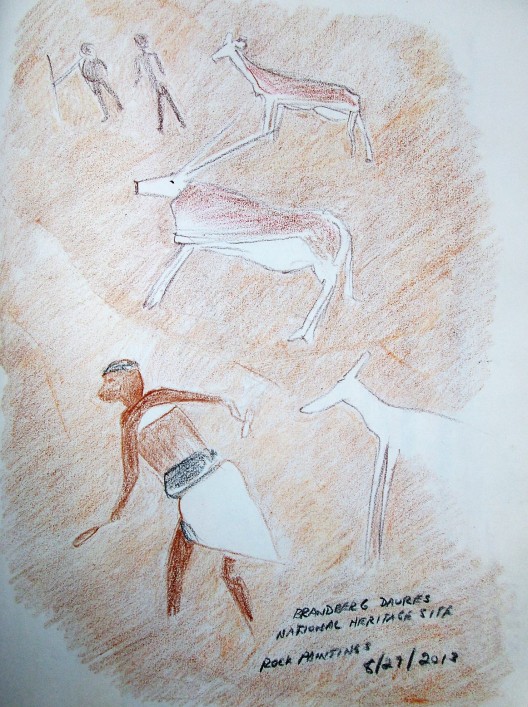 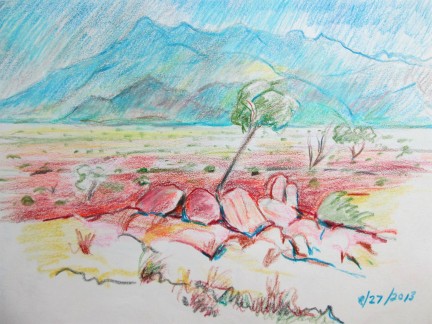 Coloured pencil sketch of the Namib Dessert. Sketched on location\ 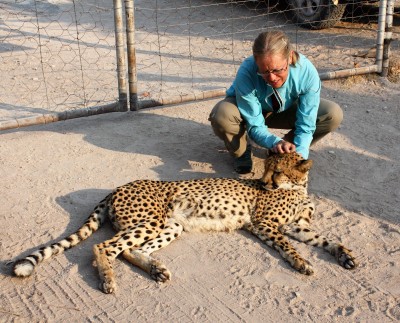 The tame cheetah’s were very gentle and were the farmers family pets.

After leaving the Okavango Delta in Botswana we headed west to Namibia and Etosha National Park.  Etosha National Park is one of Namibia’s largest wildlife parks and contains with in its boundarys what is known as Etosha Pan which is a salt flat left over from a long dry lake bed in the Kalahari Basin.  This is a great place to see animals in the dry season as they stay close to the watering holes.

I was able to do a lot of sketches while we were there. These sketches were done mainly in coloured pencil that I reworked back home in my studio with the help of photographs Lyn and I took.  Drawing and painting wild African animals has been a huge departure from painting Canadian Landscapes but I believe that as an artist it doesn’t really matter what the subject is as long as you feel passionate about what you are painting and drawing. As someone once said a picture has to pass through your heart first before you should paint it.

With this idea in mind we camped that night inside of the park in a camp ground which is protected by a high fence and so we didn’t have to worry about the sound of roaring lions in the middle of the night.  After dinner we walked a path that took us to a watering hole where we could watch the animals come down to drink.  With my sketch book I drew black rhino’s just as the sun was setting.  I think that I would be hard pressed to find anything more interesting than that.  They also made good subjects as they didn’t move too much. 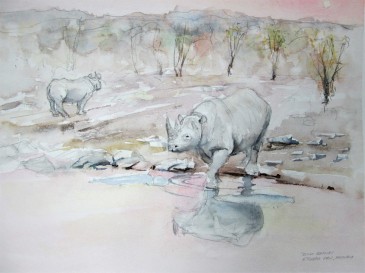 The Rhino’s came down to the watering hole just before the sun set. Watercolour wash and pencil 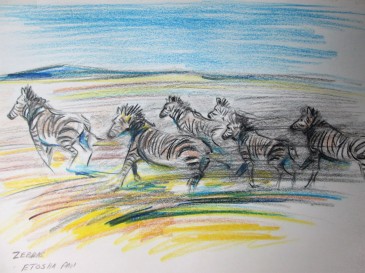 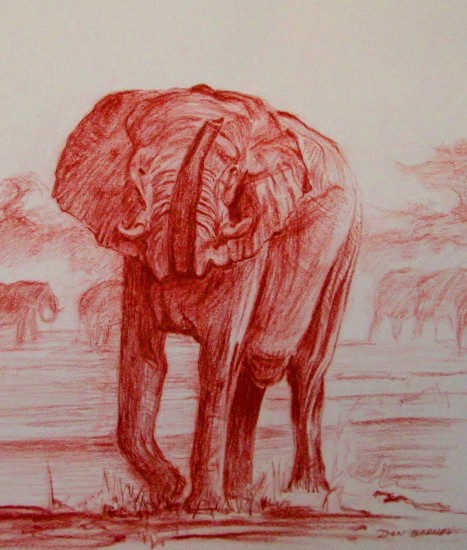 Conte Drawing done in my studio. 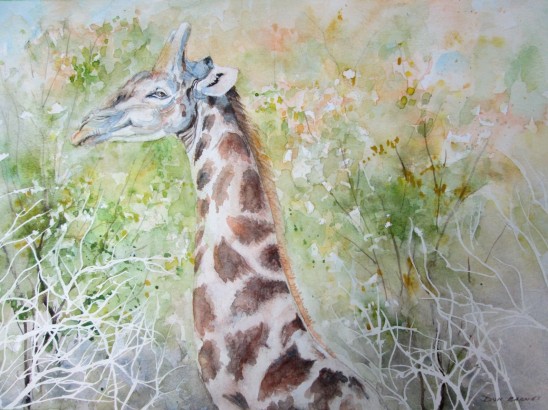 This is an experimental watercolour I did. It is a combination of wet on wet and glazing techniques. For some reason this Giraffe seems to have a Mona Lisa Smile. 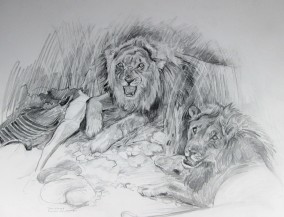 Young male lions guarding their kill. There is a good chance they didn’t kill this animal but stole it. Pencil Drawing 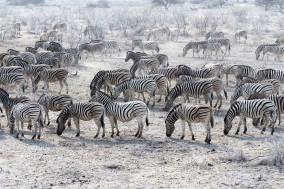 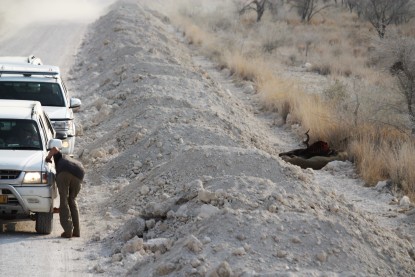 This man decided to get out of his car to check his tires inside Etosha National Park. 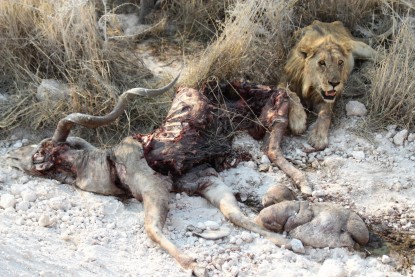 This is what the man checking his tires did not see. The man was lucky but the Elan not so much.
Widgets